Youtube channel IMtoys has been buying up a bunch of Puppet Putty and making neat things. Here's a making-of clip of some puppets from one of his recent videos: Good stuff. Hope to see more from IMtoys!
Posted by Don Carlson at 4:00 PM 1 comment:

Here are are this month's featured animators on the 'Putty blog.


Adam Taylor, who recently finished up a stop motion internship with LAIKA, shared this very cool test animation he made with Puppet Putty Teal. Gerkology on Youtube created an awesome parody of Guns 'N Roses with Puppet Putty Peach. Martin Behren, who we have mentioned on the blog before, sent us this fantastic silicone-cast skull in Puppet Putty Dark Blue. 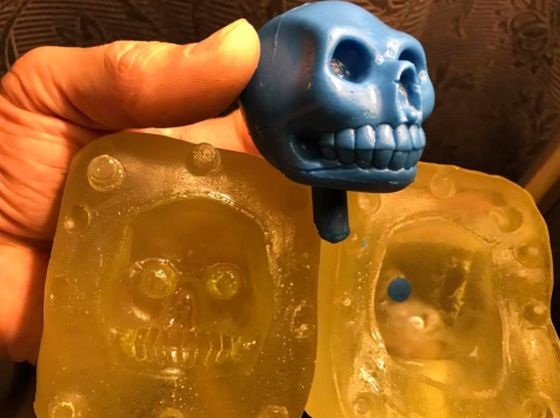 Here, also, is his incredible tribute to the face melt from Raiders of the Lost Ark. Great work, guys!
Posted by Don Carlson at 8:21 PM No comments:

Puppet Putty's untinted base (Dark White) and Van Aken were recently mixed to create many of the shots for this commercial for Toledo Ticket Co featuring Gumby and his pals. So great to have my product used in some favorite characters from childhood. Thank you Anthony Scott for the link!
Posted by Don Carlson at 12:02 PM No comments:

The first Stopmo Jam was finished recently, and here is the link to it, courtesy of Anthony Scott. Several of the entries used Puppet Putty, including "Hoppy Easter", "Waiting To Grow", and "Spring Head". Here is a behind the scenes video of the making of "Waiting to Grow, courtesy of Antonio J. Cebrián It was really cool to be part of this! Thank you, Anthony, for curating this compilation and editing it together.
Posted by Don Carlson at 10:56 AM No comments:

Animator Martin Gutierrez Behren has been doing a lot of work with Puppet Putty in a last few months. Here are the 4 films he's made so far this year.


Great stuff!
Martin is really pushing the envelope on what can be done with clay and has been very helpful with feedback on Puppet Putty.
Joy Stamp is another Puppet Putty animator and has dedicated several videos to demonstrating and reviewing it.

Posted by Don Carlson at 1:13 PM No comments:

Puppet Putty is on MTV!!!

Hi folks, I'm on the verge of "incromprehensibly excited" after receiving word today that my clay was used in Season 2, Episode 7 of "Greatest Party Story Ever". This showed up in a Facebook feed among animators who worked on it and when I commented that it seems like the colors would be difficult to keep from getting mashed and mixed together, Webster said that mixing the Dark White Puppet Putty with the other clay he's using helped with that. When I started making and selling clay, Marc and I never DREAMED it would be embraced by the professional stop motion community like it has. At the moment, it's being used on several top-secret upcoming productions. Clay animation has also been absolutely COMING ALIVE on Youtube lately, too- it's suddenly everwhere. Clay animation is coming BACK, bay-beee!
Posted by Don Carlson at 9:51 AM No comments:

Animator Webster Colcord recently directed and animated several music videos for the rock band Primus. Citing an absence of quality clay, I was tasked with formulating a mixture that combined well with the clay he already had, in order to improve its working properties in animation. The result was "Dark White", the slightly sticky untinted version of Puppet Putty Firm (Dark White is an inside joke- it's basically an ivory color, but I didn't want to re-print the labels for the 28 colors of the 'Putty, so I borrowed "Dark" from some of the other colors and "White" from the White, and combined the two. I figureed, if Gray is light black, then ivory is "dark white"). He liked it so much while working on "Candy Man", that he ordered more while he was working on the Michael Jackson-themed Les Claypool/Sean Lennon music video collaboration, "Bubbles Burst". Here are the music videos and an interview we did for Animateclay in which Webster talked about the making of "Bubbles Burst" and I talked about audio recording tricks. Combined, the videos have gotten almost 1,000,000 views. :-)


I've been a fan of Primus since the mid-90's and was inspired to learn to play bass guitar after hearing Claypool's signature style, so it was really an honor to get asked to make clay for these projects!